DO YOU KNOW “How does HIV affect/weaken your immune system?”

If you wonder “How does HIV affect/weaken your immune system” then you are on the right spot. In this article, you will learn about HIV, the replication cycle of HIV, its pathogenicity, symptoms, and opportunistic diseases step by step, and each step with visuals and pictures.

Before going to replication of HIV, first, let’s talk about this virus generally.

Let me ask you, do you know the abbreviation of HIV and what it means?

Okay, let me tell you.

And coming to the second part of the question “and what it means” so it means the weaker and low activity of the immune system against foreign pathogens due to this HIV virus attack because HIV weakens the immune system.

What disease does this virus cause?

You are asking about the pathogenicity of HIV so AIDS, a very dangerous disease, caused by this virus in which the immune system is profusely suppressed to HIV and other opportunistic diseases.

The word AIDS stands for

Why it is called “Acquired immune deficiency” and “syndrome”?

The “Acquired” means that it is caused by “Human immune deficiency virus (HIV)” and as already discussed this virus dangerously damage the immune system while the “Syndrome” means the other complications that arise due to this disease (AIDS) which we will discuss in “opportunistic diseases” later.

Tell me, Is this is an RNA virus or a DNA virus?

HIV belongs to retrovirus which means it is an RNA virus.

If this is a retrovirus (RNA virus) then how does it take to control the host cells?

This is a good question. DNA is the main genetic material that can code for amino acids and can take the host biosynthetic machinery to overtake for their use, but HIV is a retrovirus so after entry to host cell it reverses their genetic material (RNA) to DNA by the process of reverse transcription.

Before going to the replication cycle, let’s explain the structure of HIV.

HIV lives in a lipid bilayer bubble where it is protected.

This is also a very good question. As already discussed that this virus is a retrovirus and lives in a host so there they steal the part of the lipid bilayer and make a bubble for their protection.

The lipid bilayer has special proteins called envelope proteins which help them in attachment to the host cell. Let me explain them one by one.

Under envelope protein, there is another protein layer called matrix protein or p17 where capsid is present. The capsid has 20 sides due to which it is called icosahedral where the RNA resides. The sides of the icosahedral capsid are made of p24 protein. The numbers are given due to their molecular weight that’s why it is random.

Inside the capsid, two identical RNA copies with p7 protein are present. HIV needs special enzymes for the attack which he carries with itself and that is reverse transcriptase, integrase, and protease.

Now coming to the replication of HIV, Which cell in the body does the virus infect?

SO how does HIV kill t-cells??

Let’s take the cd4 positive macrophage cell as shown in the picture. Initially, in most cases of naturally acquired AIDS the virus infects the macrophages because these cells have CCR5 as a secondary co-receptor and HIV has an attraction to bind with CCR5 but after many generations, some strains are produced which can bind with CXCR4 co-receptor making the virus more dangerous. The binding starts with gp 120 of HIV which gets attached with the cd4 of macrophage. This attachment is called primary attachment but this is not enough attachment due to this the virus will form other attachments too.

But why the cell has a co-receptor for the virus?

This co-receptor is not for the virus, it is a receptor for chemokines. Chemokines are a group of cytokines whose function is signaling to the cell after secretion by the cell.

After the primary attachment, the gp 120 undergoes conformational changes which activate their other active site that bind with the co-receptor of the cell which is called chemokine receptor-5 (CCR5) in the case of macrophage cell

but in the case of T-helper cells, the binding is a little different because of different co-receptor i.e CXCR4. The co-receptor attachment is called secondary attachment.

After the primary and secondary attachment, the gp 41 is activated and undergoes the changes which will hook the target cell (cd4+ cell). The hook then pulls the virus and targets cells towards themselves and both gp 41 and target cell membrane are lipid bilayer so they will fuse.

Let me explain to you how proviral DNA integrates into human DNA?

The proviral DNA has sticky ends which are called long terminal repeats (LTR) because the nucleotide sequence is multiple repeated here. The LTR sticks the ends of proviral DNA to human DNA and also it has a promotor or enhancer region. The promotor region is activated by their special transcription factor which upon activation starts the multiplication of DNA, unfortunately, our body produces transcription factor for themselves which activates this proviral promoter region and start their copying.

Do you remember that HIV has which protein and enzymes that are necessary for their complete structure?

We discussed that was

As already discussed the transcription factor when activates the promotor region of proviral DNA, the genes are activated.

There is a gene called the GAG gene which after activation transcribe mRNA. The mRNA then synthesizes a non-functional polyprotein chain.

What is meant by polyprotein chain?

The polyprotein chain means that it contains more than one polypeptide sequence which is then cut into functional p24, p17, and p7 proteins by viral protease enzyme.

But what about the “reverse transcriptase, integrase, and protease enzymes”?

There is another gene called the POL gene which is present in proviral DNA. Upon activation, it also transcribes to mRNA and again mRNA synthesizes a non-functional polyprotein chain. The chain is again cut by viral proteases but this time into different products i.e reverse transcriptase, integrase, and protease.

Exactly. The third gene is called the ENV gene which upon activation results in transcription of mRNA which will synthesize a non-functional polyprotein chain. The polyprotein, this time is, unfortunately, cut by human cellular proteases into gp 41 and gp 120 (gp 160). This forms the envelope of the virus.

These three genes are present in all HIV.

These three genes also synthesize other six types of protein.

How? Because we have read one gene for one protein.

The HIV viral genome has a reading shift by polymerase which means that sometimes the polymerase reads the sequence one way and the other time it reads by another way. The protein made by this method is called regulatory proteins while the genes are called regulatory genes.

Can you give the example of regulatory genes and their regulatory proteins?

Following are the six different regulatory genes and their regulatory proteins.

Now it’s time for assembling these proteins and making a new virus. 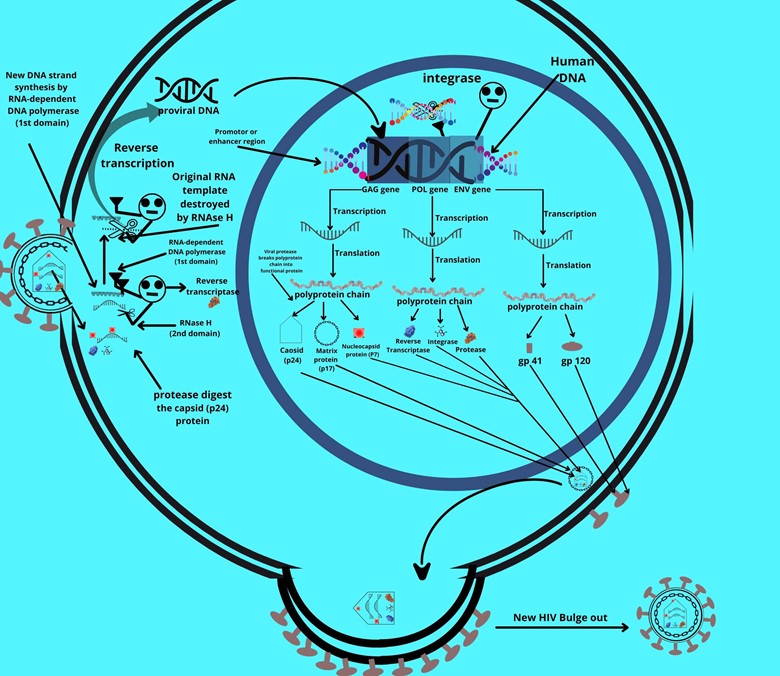 The gp 41and gp 120 proteins move to the host cell membrane where they get attached. Then the matrix protein (P17) comes and attaches under it. For the genome of virus i.e RNA, I will ask a question from you.

Do you remember that after the integration of viral DNA to host DNA?

So after assembling gp proteins and matrix proteins the genomic RNA with reverse transcriptase, integrase, and protease are covered by capsid protein (P24) and are bulged out from the cell with the stolen lipid bilayer of the host cell membrane. There are billions of bulging out of new HIV from the cell due to which it destroys the whole cell.

How much time this virus does take to produce AIDS?

Is it possible that HIV-positive does not have AIDS?

Yes, it is possible. As we discussed the co-receptor (CCR5 or CXCR4) provides a secondary attachment to the virus but in previous times some people i.e northern European descendant white population (1% of the population) were reported who were HIV positive but still they didn’t get AIDS even without any treatment. The doctors were surprised but when they researched they found that these 1% population have mutant CCR5 receptors from both mother and father so the virus couldn’t make secondary attachment and couldn’t multiply and produce disease in them. About 15% of these white northern European were heterozygous for mutant CCR5 which means half of the allele from one parent was normal while half of the alleles for CCR5 were mutant and defective due to which the AIDS was not developing rapidly in that people.

And what are opportunistic diseases?

Opportunistic diseases are the diseases that take attack when getting an opportunity and as discussed in AIDS the immune system is weakened and collapsed due to which these opportunistic infections occur.

What are the symptoms of AIDS?

The symptoms are divided into three stages.

The acute stage is followed by the clinical latency stage that can last from three years to eight years on average.

The third stage is AIDS which is signed by pneumocystis pneumonia, wasting syndrome, and esophageal candidiasis. Opportunistic diseases also start appearing in this stage.

How can we diagnose this disease?

The diagnosis is measured by the number of cd4 cells per cubic millimeter o blood. The following is a typical list of results.

The early HIV white blood cell count may be following.

This is all about HIV and AIDS and HOW DOES HIV REPLICATES.

So the answer to “how does HIV affect/weaken your immune system” is that the cd4 positive T-helper cells are destroyed by the HIV due to which the advanced immune system is not activated resulting in a weakened immune system.

The cd4 cells (T-helper etc) have receptors for HIV due to which the virus attaches itself to the cells and invades the cells for further replication and division.

2 thoughts on “DO YOU KNOW “How does HIV affect/weaken your immune system?””