It is a series of steps in which acetyl units are broken down with the release of energy-rich molecule ATP and water and carbon dioxide as a by-product is called Krebs cycle or citric acid cycle or Tricarboxylic acid cycle.

Here in this article, all the steps of the Krebs cycle with diagrams will be discussed step by step.

Why it (Krebs cycle) is called a cycle?

Before you guess something wrong let me tell you. It is called a cycle because the final product is the same as the initial product.

Remember, enzymes of the citric cycle are not in direct control of hormones rather they are sensitive to the energy level of the cell.

It means the TCA cycle depends on the requirement of energy if a cell needs energy TCA cycle will move faster and if the cell is rich in energy the Krebs cycle will stop.

Entry is the first check post everywhere so entry of pyruvate (produced in glycolysis) to mitochondria is the starting molecule and first step in all Krebs cycle steps. The steps will be discussed step by step later in this article.

So where in the mitochondria does the Krebs cycle occur?

I am not going to detail the structure of mitochondrion but for the entry of the pyruvate molecule, I am just giving you a simple structure of it.

Mitochondria has two membranes, the outer and the inner membrane.

So pyruvate has to cross both membranes?

Which one is easy to cross?

Translocase is a special carrier protein present on the membrane which makes the entry of molecules into cells.

And the inner membrane?

After the entry of pyruvate the Krebs cycle starts, am I right?

Well, you will know it after the first step.

Do you remember pyruvate is how many carbon compounds?

Yes, Pyruvate is a 3 carbon compound.

In the first step, before entering the Krebs cycle the pyruvate is converted to a two-carbon compound, Acetyl CoA.

Where is the one carbon gone?

Also in this step Coenzyme is added to Acetyl, that’s why it is called Acetyl CoA.

Do you know bond-breaking releases energy?

So what, Where the energy goes?

This energy is used to convert NAD+ to NADH (one NADH makes 3 ATPs).

But you didn’t tell about the enzyme?

Here the enzyme which works is a complex of enzymes called pyruvate dehydrogenase complex.

What is meant by complex?

Complex means there is more than one part in this enzyme.

Which are that parts?

The first one is called pyruvate decarboxylase and as the name indicates this enzyme does decarboxylation of pyruvate.

This enzyme has also thiamine pyrophosphate which fits Acetyl (2 carbon compound) after decarboxylation.

The second part of this complex enzyme is Dihydro Lipoyl Trans Acetylase which has lipoic acid sulpher sites and Coenzyme A.

After decarboxylation, the Acetyl jumps from thiamine pyrophosphate to lipoic acid sulpher sites where Coenzyme A is added and makes the molecule Acetyl CoA.

The third part is called Dihydro Lipoyl Dehydrogenase which has FAD and NAD. Now the Acetyl CoA will move from lipoic acid sulpher sites where each carbon of Acetyl CoA (2 carbons) leaves Hydrogen and make the lipoic acid sulpher sites as lipoic sulfhydryl. The Hydrogen from lipoic sulphideral is given to FAD+ to make it FADH2. FADH2 then gives its hydrogen to NAD+ to make it NADH.

But remember, this step is not part of the proper Krebs cycle because pyruvate is the product of glycolysis though it occurs in the mitochondrial matrix. But it is the most important step because it provides the main fuel to the Krebs cycle.

Can you remember a sentence before going to details?

“CAN I KEEP SELLING SUCROSE FOR MONEY OFFICER”

In the second step (First step of the proper Kreb cycle), the Acetyl CoA (2 carbon compound)
with oxaloacetate (4-Carbon compound) are condensed together to form citrate (6 carbon compounds) and CoA is removed from it by citrate synthase enzyme.

Do you know how this enzyme (citrate synthase) is activated and inhibited?

Okay, let me tell you.

This enzyme has two points i.e stimulatory and inhibitory points.

But how it is stimulated? 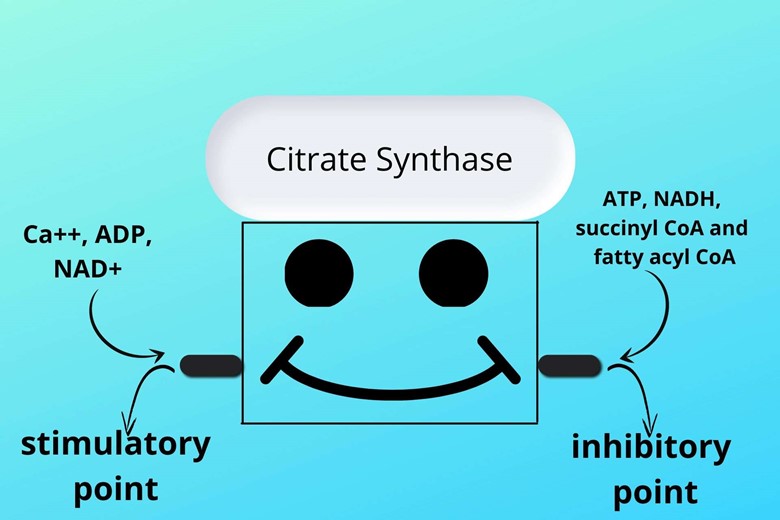 An increased level of Ca++ indicates that cell is functionally active such as muscle cells, glandular cells, nerve cells, etc. other stimulatory factors are increased levels of ADP, NAD+ which show cells are deficient in energy and need energy.

And how it is inhibited?

But how fatty acyl CoA?

Yes, when energy levels are very high in a cell the extra energy is converted to fatty acid and stored in the body.

The citrate leaves the mitochondria where it releases its parts i.e oxaloacetate and acetyl and CoA is added to it, then the Acetyl CoA runs fatty acid synthesis.

Remember this step is a one-way step i.e it can move only in the forward direction.

Do you remember the second word of the sentence?

What does “I” stand for in the sentence?

What was the third word of the sentence? 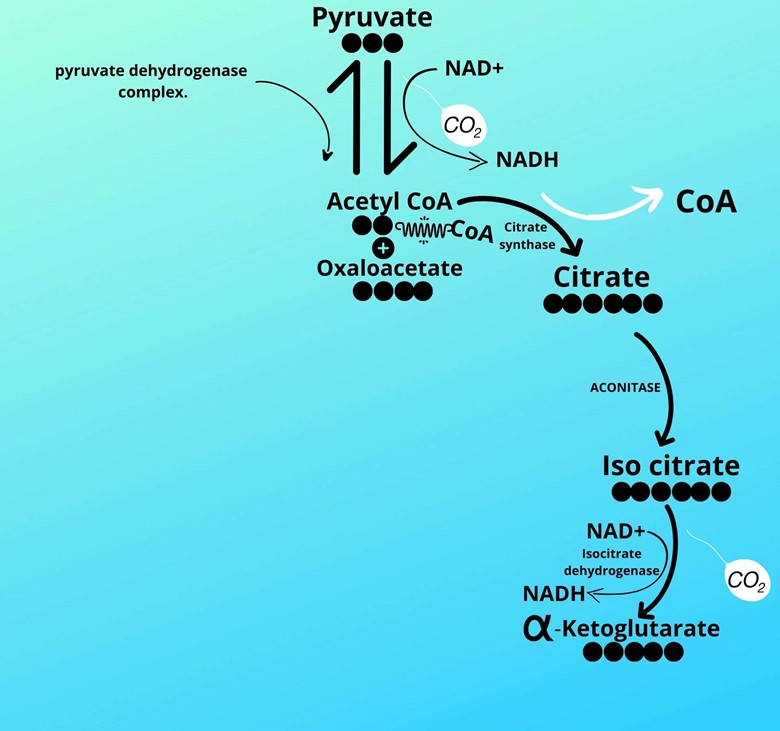 Did you notice anything?

Yes, yes. One carbon is removed.

How it is removed?

Did you notice something more?

I am confused, please tell us.

So it means the formation of NADH?

Yes, this energy is used to convert one NAD+ to NADH.

The next word is “selling”.

Yes, I remembered that now.

So it means again CO2 is removed with the release of energy?

Exactly, now you are getting the point.

Decarboxylation removes carbon dioxide while the energy released from the breaking of the bond is used to convert NAD+ to NADH.

Did you spot something additional in this step?

Look at Coenzyme A, CoA is added to succinyl so that it becomes succinyl CoA.

What is the enzyme that works here?

Before going to it let me ask you.

Did you remember the “pyruvate dehydrogenase complex” enzyme?

Yes, this enzyme had 3 parts.

That’s what I want to recall you.

You should guess that in this step CoA is added so it means the complex is providing this CoA, also hydrogen is given to NAD+ to make NADH.

From onward this step the number of carbon will be the same (4), only there will be the orientation of structure in the carbon skeleton.

In this step, succinyl CoA is converted to succinate. The CoA is removed by succinate thiokinase enzyme whereas some energy is released in this step which converts GDP (Guanosine diphosphate) to GTP (Guanosine triphosphate).

GTP is a purine nucleoside triphosphate which is one of the building block units needed for RNA synthesis during transcription.

No, this molecule (GTP) gives its inorganic phosphate (Pi) to ADP and converts it to ATP so directly one ATP is synthesized and this type of ATP is called substrate-level ATP because no oxygen and Electron Transport Chain is involved.

In step 6 succinate is converted to Fumarate by succinate dehydrogenase. Also in this step, some energy is released which is not enough to convert NAD+ to NADH so this less amount of energy is utilized to make FADH from FAD+ (One FADH makes two ATP).

The Fumarate is converted to Malate in this step by the Fumarase enzyme. This step is also a two-way reaction.

Step 8 is also an energy-releasing reaction in which conversion of Malate into oxaloacetate occurs by Malate dehydrogenase and with the release of energy which is utilized to make NADH from NAD+. This ends the TCA/ citric acid cycle. The oxaloacetate then condenses with Acetyl CoA to repeat the cycle. The above image shows all the steps and reactions of the Krebs/ Citric acid/ TCA cycle.

Let’s calculate the ATP production in this step?

So a total of 12 ATP are produced from one molecule of pyruvate in the Citric Acid Cycle.

It means 12 ATP are produced from one Krebs cycle.

But do you know how many pyruvates were subjected to the Krebs cycle?

Yes, that was two.

So it means 24 ATP are produced from one glucose molecule in the Krebs cycle.

This process occurs when the energy level is low in a cell but if the cell has very rich in energy what the cell will do to glucose?

As already discussed if the level of glucose is high in the cell the energy will move out from mitochondria in the form of citrate because Acetyl CoA can’t leave the mitochondria. And then the citrate will release Acetyle CoA and oxaloacetate in the cytosol and will start lipid synthesis (lipogenesis) to store extra energy in the body.

So what do you conclude that besides energy production what are the other functions of the Krebs cycle?

Summary of the Kreb cycle:

So Krebs cycle is a series of steps in which acetyl units are broken down with the release of energy-rich molecule ATP and water and carbon dioxide as a by-product.

The common questions and products that asked about the Krebs cycle are:

What is another name for the Krebs cycle?

The other names for the Krebs cycle are the Citric Acid Cycle or Tricarboxylic acid cycle (TCA).

What is the molecule that enters the citric acid cycle?

The molecule that enters the Krebs cycle is Acetyl CoA which is derived from pyruvate.

How many NADH is produced in the Krebs cycle?

And how many FADH2 are produced in the Krebs cycle?

One FADH2 is produced in the Kreb cycle which further produces 2 ATPs in the Electron Transport Chain.

How manyco2 are produced in the Krebs cycle?

Some molecules need to lose Carbon to convert themselves to another molecule, for this, the Oxygen reacts with the Carbon of the molecule and removes it from it. A total of two Carbon dioxide molecules are produced during the Krebs cycle.

Is oxygen required for the Krebs cycle?

Yes, when Oxygen is available the glycolysis will proceed to the Kreb cycle, though the Kreb cycle doesn’t use oxygen and in the absence of oxygen, the pyruvate is converted into lactate.

How many times does the Krebs cycle turn per glucose?

This was all about the Krebs cycle, for better understatement I recommend you to read the full article where I have made it very simple by breaking it into steps with a diagram each.

Tell me in the comment if you have a question?