Just carefully look at the name you will get the meaning.

So Gluconeogenesis is the synthesis of new glucose from non-carbohydrate or non-glucose sources.

The process of producing glucose from noncarbohydrate sources is called Gluconeogenesis.

Is there any difference between gluconeogenesis and glucogenesis?

Some people search gluconeogenesis as gluconeogenesis vs glucogenesis to know their difference but I would like to tell you that both are the same terms, however, glycogenesis is different which means the synthesis of glycogen from the chaining of glucose.

The non-carbohydrate or non-glucose source is the molecules other than carbohydrates like proteins, lipids, etc.

Usually, glucose is broken down to release energy but here the myth is the opposite.

Let me ask you a question

Do you know where extra glucose is stored in the body?

The liver, Liver is the storehouse of glucose where extra glucose is stored in the form of Glycogen.

And even when the glucose becomes more after storage in the liver then where does it go for storage?

And when this extra glucose is released?

When there is a low blood glucose level then liver glycogen is back converted to glucose and released into the blood for their action.

But did you think what will happen if all the liver glycogen is used like in a fasting state?

That’s why we are discussing “when gluconeogenesis occurs.”

When all your glycogen is used then gluconeogenesis becomes active to synthesize new glucose because in the fasting state there is no supply of glucose from GIT, also the blood glucose level is constantly used.

But if I am at rest why the body needs glucose?

Require a constant supply of glucose.

But where does gluconeogenesis take place i.e the organs?

How does the process start?

In the glycolysis and Krebs cycle, the glucose was broken down to release energy but here we have to reverse the process to produce glucose.

So we have just to reverse these processes in the gluconeogenic pathway?

Yes, but it is not so easy just to reverse the process.

Because we have 3 irreversible steps of glycolysis which are one way, it cannot be back directly by the same enzymes.

The cells have some mechanism to reverse these steps but with different enzymes and different pathways.

What are those steps?

Let me just quickly gives you a very brief review of those steps (in glycolysis) in a picture then I will go with gluconeogenesis that how that step is reversed.

Look at the picture and see steps 1, 3, and step 9 of glycolysis.

But if there is no glucose how these processes are reversed?

Good question. For Gluconeogenesis some raw materials are needed. Glucose is a six-carbon compound so we need some carbon skeleton from which we can make new glucose.

The raw materials for gluconeogenesis are:

From where we can get lactate?

Before going to discuss Lactate you must know that lactate can be converted to pyruvate. An enzyme called Lactate Dehydrogenase (as the name indicates) removes Hydrogen from Lactate and converts it to pyruvate. Hydrogen is used to convert NAD+ into NADH. Pyruvate and lactate are interconvertible molecules.

As it is discussed Lactate can be converted to Pyruvate But from where to get Lactate? 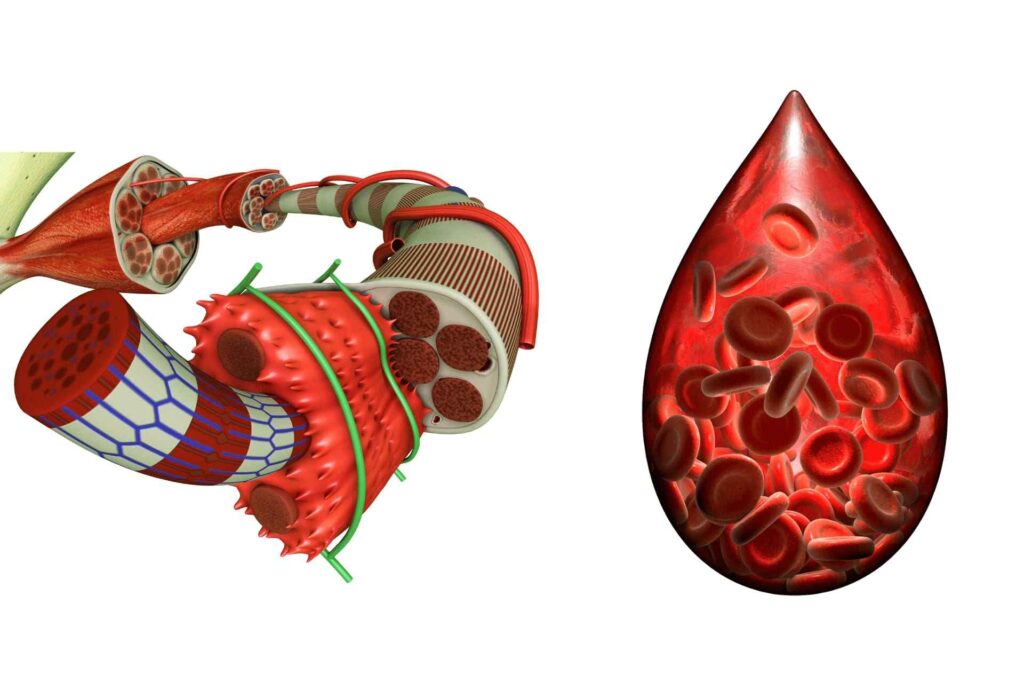 From Muscles and RBCs.

But the product is pyruvate, not lactate?

The enzymes which convert pyruvate into Lactate are present in muscle cells so the muscle’s pyruvate is converted into lactate by adding hydrogen to it from NADH and releasing NAD+.

The Lactate is then released into the blood and then moves to the liver.

After entry into hepatocytes, it starts the gluconeogenesis pathway steps (will be discussed later).

Pyruvate itself sometimes leaks out from muscle cells and enters to gluconeogenesis pathway.

In muscle and amino (NH2) group (Amination) is added to pyruvate which results in the formation of an amino acid called alanine, then alanine is released to blood from where it moves to the liver. In the liver, deamination removes the amino (NH2) from alanine and is converted back to pyruvate in the liver.

There are some other amino acids that after deamination and further modification are converted to oxaloacetate which again reverses the Krebs cycle to glucose of glycolysis which is known as amino acid gluconeogenesis.

so we also concluded from the above discussion that in a prolonged fasting state proteins are catabolized to release amino acids which then participate in gluconeogenesis.

In a fasting state when glucose supply is stopped, the fat cells also called adipocytes that have triglycerides.

Do you know triglycerides?

Triglycerides are broken down to free fatty acid and free glycerol from adipocytes by the process of lipolysis. The free glycerol and fatty acids are then released into the blood, from where it moves to the liver.

In the liver, an enzyme called Glycerol kinase adds a phosphate to it and converts it to glycerol phosphate, and then after multiple conversion steps, it is eventually converted to dihydroxyacetone phosphate which is then reversed to make glucose (will be discussed later)so gluconeogenesis from glycerol is another way to make new glucose.

What about fatty acids?

Fatty acids move to mitochondria where it is converted to Acetyl Co-A and it also activates the enzyme pyruvate carboxylase (will be discussed later).

So we have got the raw materials for gluconeogenesis now we have to convert it to glucose by reversing the process.

But just by reversing the Krebs cycle and glycolysis process, we can get new glucose from these raw materials, isn’t it?

In glycolysis, most of the steps have enzymes that can direct the reaction forward as well as in reverse direction so that steps can be easily reversed by the same enzyme in gluconeogenesis but there are some steps that are the only forward direction. To reverse that steps we have to find an alternative pathway.

Which steps are these?

There are three steps in glycolysis that are irreversible i.e

Fructose 1, 6 bisphosphates to Fructose-6-phosphate by phosphofructokinase,

Glucose-6phosphate to Glucose by hexokinase.

We have these three blocks which can’t be reversed by the enzyme that moves it in the forward direction so here we need some special enzymes which can reverse the reaction to make glucose.

We are going to discuss these steps one by one.

Do you mean “Pyruvate to phosphoenolpyruvate”?

Exactly, because pyruvate kinase can’t reverse the process, it needs another special enzyme to reverse it.

Do you see pyruvate in the Krebs cycle in the picture?

How does pyruvate carboxylase work?

Manganese (Mn+), Magnesium (Mg+) ions, and Biotin vitamins are required for pyruvate carboxylase functioning while they require ATP for glucose production because we are going to make a molecule.

Here I want to tell you about a medical condition.

What is that situation?

Eggs especially uncooked eggs have a special protein called Avidin which binds avidly/strongly with biotin so for those people who eat uncooked eggs, their biotin is not available which then stops the functioning of pyruvate carboxylase and eventually leads to trouble in the gluconeogenesis pathway.

But how this enzyme is activated?

Also, the fatty acids after conversion to Acetyl Coenzyme A don’t activate the pyruvate carboxylase and reverse the Krebs cycle and make the glucose after reversing glycolysis too.

Now, what will be happened to oxaloacetate?

The pyruvate is converted to oxaloacetate but still, we have a problem.

The problem is that the oxaloacetate is a very important component of the Krebs cycle so it can’t leave the mitochondria.

So what do cells do then?

The cell breaks NADH to NAD+ and releases the hydrogen to cover the oxaloacetate by an enzyme called mitochondrial Malate dehydrogenase. The resultant compound after covering by hydrogen is now called Malate. Now the Malate can leave the mitochondria.

This process of malate coming out is called the Malate shuttle.

Still, we didn’t get phosphoenolpyruvate?

Now, what will happen?

But here is another block point that can’t be directly reversed by phosphofructo kinase-I as it did forward direction.

Before going to reverse this step let me review their forward action first then you will understand the reverse step.

Do you know which enzyme converts Fructose-6-phosphate to Fructose 1,6 bisphosphate?

But who activated this enzyme?‘

There is a hermaphrodite-like enzyme that has two parts one is phosphofrcto kinase-II (kinases adds phosphate to the molecule) and the other part is called Fructose 2, 6 phosphatase as it removes phosphate from Fructose 2, 6 bisphosphate (phosphatase remove phosphate).

But which part of the enzyme (kinases or phosphatases) are activated, and how do they decide?

But how Fructose 2, 6 phosphatases are activated, how do cells know?

How does it happen?

When the level of glucose is low glucagon is released which then binds with its receptor on the plasma membrane and this stimulated receptor is then coupled with G-stimulatory protein in the cell.

The G-stimulatory then stimulates adenyl cyclase which converts ATP to cAMP (cyclic AMP) and the number of cAMP in the cell increases. The cAMP in turn activates protein kinase A enzyme which phosphorylates both Fructose 2, 6 phosphatase, and phosphofrcto kinase-II enzyme.

Now let me tell you some of the roles of “protein kinase A”.

I think you are tired of repeating the names and maybe you get confused but read carefully and logically you will understand everything.

Now we are near to finishing it by converting it to just glucose?

Yes but only with a block remaining. The Glucose-6-phosphate can’t be reversed by the same enzyme i.e hexokinase converted it in a forward direction because it is a one-way enzyme.

Do you know that cells have endoplasmic reticulum?

But what is the function of the endoplasmic reticulum here?

This cycle of pyruvate and lactate to hepatocytes from muscle cells and then the formation of new glucose molecules from it and then returning of glucose to the muscle is called the CORI cycle, besides fasting state this happens when muscles are doing constantly and heavy exercise.

As already discussed that gluconeogenesis occurs in the liver and kidney, do you know why?